Who was William William Morris? 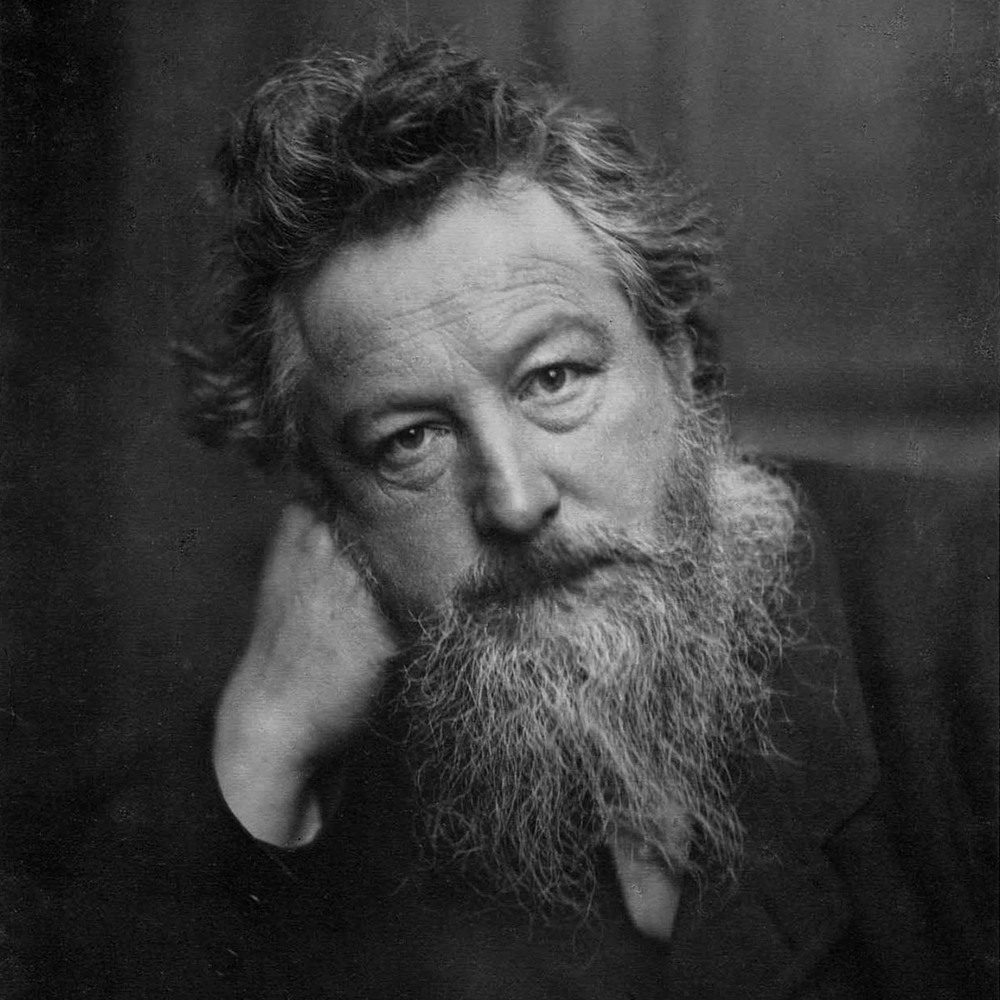 Known for his unique textile designs, traditional production techniques and Socialist prose, William Morris certainly made his mark on the 19th century. So much so, that 125 years after his death, our soft furnishings continue to be inspired by his work.

Love vintage patterns and want to know more about their origins? Read on to learn more about William Morris’ life, artistic methods and some of his most iconic designs that we still feature in our collections today!

Born 24th March 1834 to affluent middle-class parents, William Morris spent most of his childhood at his family’s country home on the edge of Epping Forest, Essex. It was here that he first became fascinated by the nature and wildlife which would later feature in his intricate textile patterns.

After being privately educated throughout his teenager years, Morris began studying Theology at Oxford University in 1853. Whilst there, he met Edward Burne-Jones, a talented painter and fellow trainee-clergyman. However, it quickly became clear that the pair were more interested in art and Socialist reform than the church.

Inspired by the social commentaries of revolutionaries like John Ruskin and Thomas Carlyle and an architectural trip in Europe, Morris left University and began training as an architect. However, he soon moved on again to pursue his passion and career as an artist.

During the late 1850s, he met and began painting murals with pre-Raphaelite artist Dante Gabriel Rossetti, who was equally inspired by medieval revivalism art. As well as developing his artistic skills at this time, William Morris also challenged class boundaries by marrying Jane Burden, a stable hand’s daughter.

The couple moved into a rural medieval style home in Kent, known as Red House, which was designed especially for them by an architect friend. Morris then called on his artistic friends to help them design and decorate the interior with dramatic wall murals and detailed hand-made textiles.

The results led to the creation of Morris’ first interiors company with friends, ‘Morris, Marshall, Faulkner & Co’ in 1861. Together, this group of artists and craftsmen produced everything from embroidered tapestries to stained glass windows for churches. They even furnished rooms at the V&A Museum and St James’ Palace.

However, it wasn’t until the late 1860s that the company’s first printed textiles were produced using hand-cut blocks and natural dyeing methods.

By the early 1870s, William Morris had designed several floral and country garden inspired wallpapers and was beginning work on carpets and rugs. He became the sole director of Morris and Co in 1875 and created some of his most iconic patterns in the decade that followed, which we’ll look at in more depth below.

At Victoria Linen, we have designed a range of luxury cushions inspired by some of Morris’ prettiest vintage patterns – with Strawberry Thief a favourite of ours. This design was inspired by the thrushes that would steal fruit from his country garden in Oxfordshire. 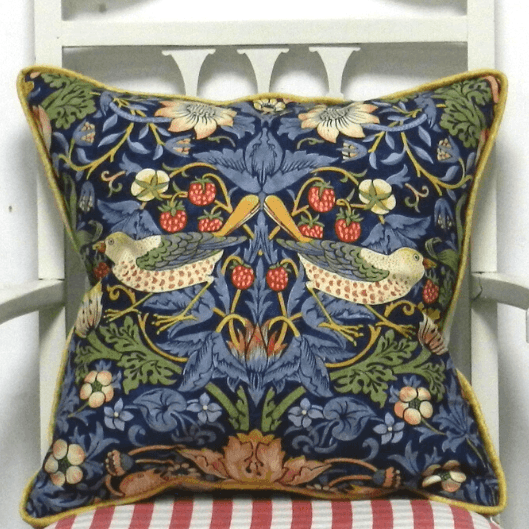 In his later years, Morris focused more on writing and political activism as part of a new Socialist League. However, he continued to work on tapestries and also set up Kelmscott Press where he designed medieval typefaces and borders for limited-edition books. Morris’ final works can be seen in the 1896 Kelmscott Chaucer, published just months before his death in October that year.

A highly influential figure in the 19th century Arts and Craft Movement, William Morris is renowned for his rejection of Machine Age design. Instead, all of his creations were hand produced using traditional weaving and natural dyeing techniques. In fact, he was so opposed to the use of manmade chemicals, that he spent several years working with a silk dyer to revive old-school staining techniques.

To create his unique textile designs, Morris used fabrics like silk and wool, and sometimes embellished them with metallic thread. For his repetitive patterns, he took inspiration from a variety of different sources, including historical European art, Italian silks and bold Indian cottons that were imported to Britain at the time.

Having adored the beauty of the natural landscape since childhood, many of Morris’ jacquard patterns featured birds, leaves and flowers such as tulips, roses and thistles found in English gardens.

For example, take a look at our Seasons by May cushion which features stylised red roses, yellow tulips and several parakeets backed by twisting vines and leaves. 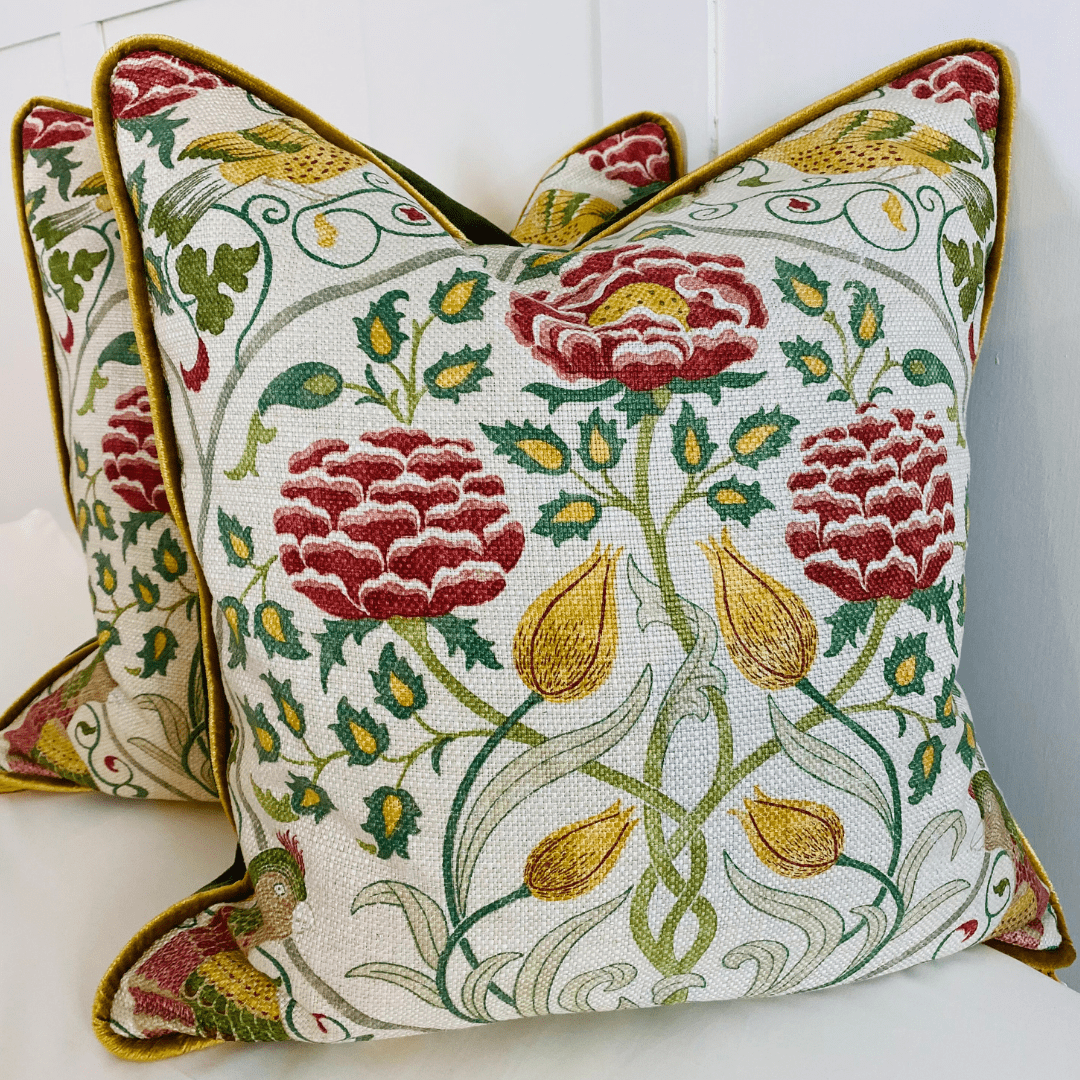 Recreate your own Morris-inspired interior

At Victoria Linen, we continue to be inspired by William Morris’ passion for high-quality and thoughtfully designed home furnishings. In fact, his motto: “Have nothing in your house that you do not know to be useful, or believe to be beautiful,” resonates with many of our own craftspeople who are passionate about creating beautiful and functional items for our customers.

With that in mind, we have been incredibly blessed to have the opportunity to create a range of luxury cushions inspired by Morris’ most renowned vintage patterns like Snakeshead and Wilhelmina. Hand-crafted in our Lancashire workshop, all of our Morris and Co cushions are filled until plump and trimmed with elegant piping for an added layer of sophistication.

Alternatively, to elevate your guest bedroom or treat someone special, you may want to explore our range of intricate Morris and Co gifts and homeware.

From diffusers and guest soaps to lavender eye masks, William Morris aficionados will love our collection. Can’t find exactly what you’re looking for? Contact us today and we’ll see what we can do!